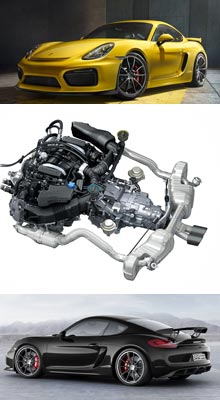 Porsche has once again left the door open for some additional engine performance improvements with the new GT4 by continuing to utilize the same factory intake found on the 981 S and GTS models. These intake systems employ the smaller more restrictive 74mm throttle body which limits power and torque potential. The new GT4 may have the 991 Carrera S 3.8L engine but it did not come with the larger 82mm TB that is OE for both Carrera engines. Again, Porsche is famous for controlling engine output by choking the inlet tract with a less than optimum TB size. This has handicapped the Cayman from treading on Carrera territory and the now it shackles the GT4 from entering the ring with the GT3.

Porsche claims the 991 Carrera S delivers 420 HP and the GT4 delivers 385 HP but if they are the same engine why does the GT4 produce a whopping 35 less HP? This means the GT4 engine is only 15 HP stronger than the 991 Carrera Non-S 3.4L engine. Of course these are only advertised figures and as we all know, “tuning” plays a crucial role in engine output. The bottom line is that Carrera S engine benefits from the IPD Plenum without a larger TB, so the GT4 should perform even better with the Plenum and more appropriately sized 82mm TB.

Initial dyno tests performed in Germany showed gains of 17 HP and 11 foot pounds of torque at the wheels. But the 981 requires more ECU “adaptation” time than any other Porsche model so it may take over a hundred miles for the “adaptative” process to be fully complete. This means the realized performance gains could be even greater over time. The IPD dealers who have installed and driven the GT4 with the 82mm Competition IPD Plenum have all collectively been impressed with the performance gains and given positive feedback. The IPD Plenum delivers net gains throughout both power and torque curves helping it compete with its bigger and more famous brother, the GT3. Learn more about the GT4>>

Until then, here is another entertaining Porsche video dedicated to the GT4.